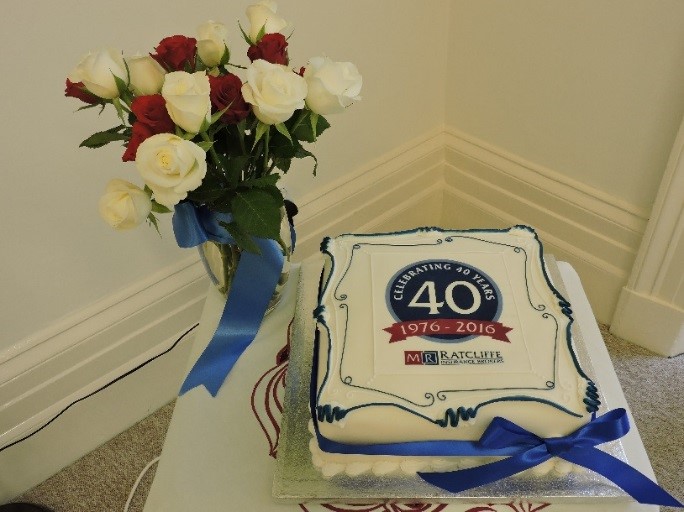 You can’t have a celebration without cake, and we at M R Ratcliffes have cause to celebrate. It has been 40 years since we started to provide insurance for the transport and haulage industry.

1976 was the beginning of a great adventure. It was a good year, momentous not just for M R Ratcliffe Consultants Ltd. This year was also significant for Concorde, Apple Computers, NASA, Sylvester Stallone and Southampton FC. 40 years ago dreams, ideas and creativity were being realised.

Whilst working as a specialist haulage broker at R J Dallow in Hereford Michael Ratcliffe started to think about setting up his own business. He had built up a loyal client base who followed him over to Ratcliffes when he set up in Rodney Road, Cheltenham on the 13th December 1976.

At that time, Graham Davies who was working at the time for Provincial Insurance, Bristol (now AXA). Mr Ratcliffe was placing a lot of Goods In Transit and Liability business with him, when he was persuaded to join the company in Cheltenham. Graham joined the firm in 1980. They subsequently started out with 5 employees which increased within a short time including Jackie Simpson who started as a YTS trainee aged 16, followed by Linda Freeman. We are pleased to have a staff team of 35. Then in 2002 the company expanded and set up a wholesale division, which has over 250 Broker Partners.

Once established Mr Ratcliffe started to think about giving back to the community and set up The Ratcliffe Trust, a housing project for young homeless people which went on to become CCP, a county-wide (and beyond) organisation that has helped thousands of vulnerable people and families.

Other charities Mr R founded include The Isbourne Centre, IT Schools Africa and Makhad Trust.

Over the years we have had the privilege of working with some extraordinary individuals, people who have helped us to grow and shared our journey. A big thank you to the staff, hauliers, brokers, transport businesses and insurers who have supported us. You have been part of our success in making M R Ratcliffes what it is today. We look forward to strengthening our partnerships over the next 40 years.